The issue of Resolution Professional’s fees has been a matter of debate and negotiation for quite some time now in the country.

– IBBI has stipulated that RPs cannot accept or share any fees with the other professionals and other support services providers appointed under the corporate insolvency resolution process/Liquidation process.

– Introduction of a minimum fixed fee structure per month that would be linked to the number of claims admitted.

The issue of Resolution professional’s fees has been a matter of debate and negotiation for quite some time now in the country.

Insolvency regulator- Insolvency and Bankruptcy Board of India has brought in two key changes in the regulations around fees charged by resolution professionals (RPs).

Let us understand these changes one by one –

–          This fixed fee can be increased by the Committee of Creditors (CoC) depending on the cases. The reasons for the increase should be recorded in writing.

A concept of performance linked incentive fee has been introduced for timely resolution, with a cap of ₹ 5 crore.

A performance linked incentive fee for value maximisation to be paid to the resolution professionals is now allowed by Insolvency and Bankruptcy Board of India at the rate of one per cent of the amount by which the “realisable value” is higher than the liquidation value.

Now for all those who don’t know what is realisable value let’s understand what it is- The net realisable value is the value of an asset that is sold, after subtracting all the costs connected to the sale.

This performance linked incentive fee for value maximisation would be available after the approval of the resolution plan by the Adjudicating Authority.

There have been some instances when NCLTs had to intervene to settle  the fee of insolvency professionals during the whole process.

This is a welcome move which will help in ensuring transparency in the payment. It will also help save the time and reduce burdened with the issue of fixing the remuneration.

The Micro Small and Medium Enterprises Act, 2006 (MSMED Act) has been enacted for the growth and regulations of micro, small and medium enterprises (MSME) in India. It aims to facilitate the promotion, development and enhance the competitiveness of MSMEs.

The act also provides for dispute resolution for MSMEs.

Dinesh shares that the act aims at facilitating the promotion and development of MSMEs and providing a mechanism for protection against delay in payment from a party and right of interest on delayed payment;

-role of the facilitation council

Apart from the provisions provided under the MSME Act, Dinesh also shares some key issues with regard to dispute resolution under this act. Like the MSME must be registered before initiating proceedings under the Act. The Jurisdiction will be the Facilitation Council where the supplier is located. The act provides for a two-tier process to resolve payment disputes. The Act will be set in motion if the buyer does not pay the supplier (being an MSE) on the agreed date and in no case beyond 45 days from the date of acceptance or the day

of deemed acceptance. Another important aspect to be aware of is that the Arbitration clause in a sale contract does not prevent the admission of the claim for statutory arbitration by the Facilitation Council under the Act.

Watch the full video to understand dispute resolution under the MSME Act. 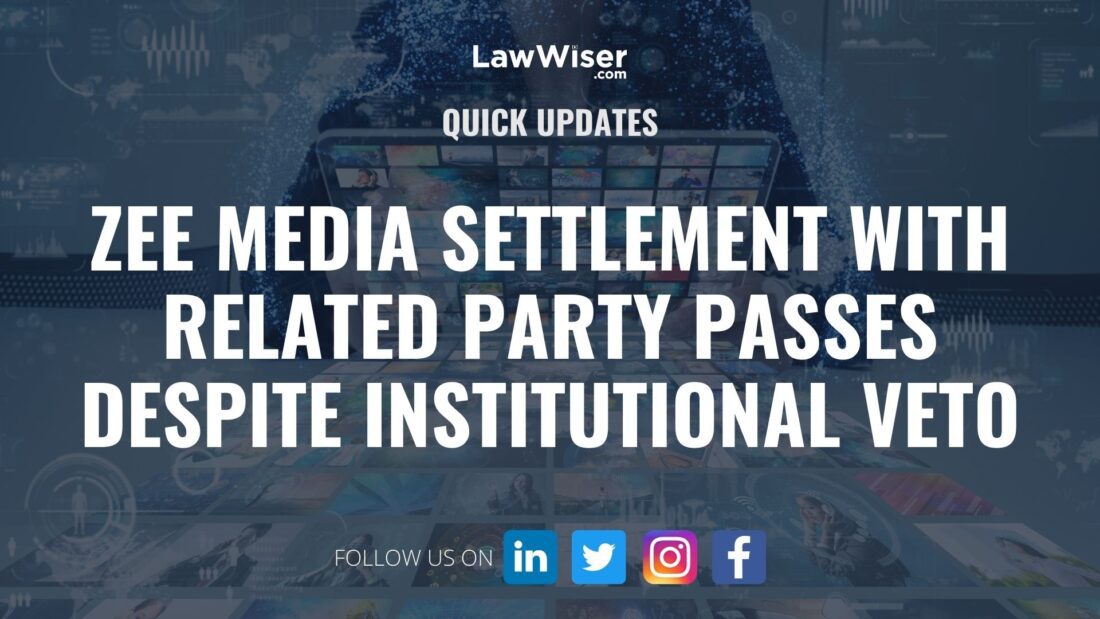 Tune into the latest video where #LawWiser takes you through the update “Zee Media Settlement With Related Party Passes Despite Institutional Veto”. And answer the interesting question that we have shared related to the update.

In this video, Prabhjot Singh shares the update on the resolution to approve Zee Media Corp.’s settlement with Diligent Media Corp., which involved writing off nearly Rs 127 crore from the Zee media company, passed despite opposition from institutional investors.

Zee media said Diligent Media’s total liability towards itself stood at around Rs 309.3 crore in a postal ballot notice. In the end, Prabhjot has also shared an exciting question related to the update. Watch the full video and answer the question in the comment section below.

Arbitration has found strong ground in India; however, Mediation is still finding its foothold.

In this super interesting conversation, they discuss important aspects related to the Arbitration and Mediation in India.

Watch them taking us through the current scenario in International Arbitration.

And navigating through the need for the new proposed law of Mediation in the country.

Also, what is the the benefit that mediation brings to the table.

The Emergence of Commercial Justice Through Arbitration

Watch our second video on the recently launched Book titled “The Emergence of Commercial Justice: Insolvency And Arbitration” by Vivek Sood, Senior Advocate. The book explores and analyses game-changing judgments delivered by the Supreme Court in establishing the concept of Commercial Justice. Our Guest speakers include the author of the Book Vivek Sood, Senior Advocate, along with Tejas Karia, Partner, Head of Arbitration, Shardul Amarchand Mangaldas and Mayank Mishra, Partner, IndusLaw.

The discussion focuses on the Emergence of Commercial Justice through Arbitration. Our speakers take us through why Arbitration is a viable mechanism for dispute resolution, independence of Arbitrator, issue of stay on arbitral awards and the changes required in the law.

Foreign Seat of Arbitration, Vasanth Rajasekaran – In a minute

There has been a lot of debate on the issue of whether Indian parties can elect a foreign seat of arbitration. Recently the Supreme Court of India answered in affirmative on this issue.

In the first LawWiser #Inaminute video powered by Phoenix Legal watch Vasanth Rajasekaran, Partner, Phoenix Legal, speak on the Foreign seat of arbitration. He is an expert in Dispute Resolution.

Introduction to Foreign seat of arbitration

Recently, the court’s judgments had a lot to tell us about the foreign seat of arbitration.

Let us have an insight into the foreign seat of arbitration.

The Supreme Court has held in the landmark case of PASL Wind Power Solutions Pvt Ltd. that Indian Parties desirous of availing renewable energy sources should be allowed to appoint a Foreign seat of arbitration for the purpose.

The decision has, finally, paved the way for wind power plants in India and encouraged the growth and development of wind energy resources in India.

In the landmark case, the Supreme Court of India held that Indian law did not permit Indian citizens the right to appoint a Foreign seat of arbitration as their representative to an international arbitration forum.

The apex court has ordered Indian authorities to stop all mandatory representation and appointments of Foreign Parties to foreign tribunals. However, the apex court’s order does not bind the federal government to comply with this order.

According to the Public Policy Research Council of India, the main public policy reason the Indian government should not abide by the apex court’s order is public policy and the interests of Indian citizens, especially the poor.

According to the council, there are three main reasons for not complying with the apex court’s order.

Firstly, they argue that the service of a Foreign Party is essential to maintain the economic and social balance in the country. Secondly, they say that it is in the interest of Indian citizens for the tribunals to function functionally.

Thirdly, the poor public policy position of the government is cited as one of the primary reasons why the apex court did not direct the central government to abide by order of Public Policy.

Another opinion of the apex court cited the long tradition of the practice of Indian courts to reject or restrict the eligibility of its citizens to represent foreign corporations at the federal or state level.

As a result, Indian law has always accepted the non-reciprocal relationship between the Centre and the Indian lower house of parliament, the Rajasthan Assembly.

The court orders dated 4th March 2003 clearly state that it is not in the interest of the Indian citizens to allow a foreign representative to sit on the Indian court.

On the other hand, the government contends that the spirit and letter did not make the application made by the apex court to the Indian lower house of the order of the court.

They further maintained that the application was meant for the benefit of all categories of people across the society, rather than any particular set of people.

The arguments advanced by the government do not hold water if we analyze them properly. The apex court did not refer to any statistical study or research on the percentage of representation of foreign parties in Indian law firms.

It does not support their argument, as the percentage of representation of foreign parties in Indian law firms is relatively low.

If there was such a high percentage of representation of foreign parties in Indian courts, then why did the government ask the apex court to reverse its earlier decision? The answer is straightforward.

The government wanted to use the judgment dated 5th March 2003 to bring about socio-economic development in the country, which is opposite to the objective of obtaining a foreign seat of arbitration.

Thus the government wanted to ensure that its citizens had equal opportunity irrespective of their seat of arbitration. The question is, what can be done to reverse the decision of the lower court?

Currently, India does not have any uniform civil code. However, in practice, each country’s citizen has the right to become a member of any organization that caters to any individualized sector of people.

Since the country’s constitution does not provide for an equal opportunity in this regard, the government is forced to resort to allowing membership in organizations that cater to the various segments of society.

It can be understood as an attempt by the authorities to remedy the discrepancies existing in the country’s constitution regarding civil and political rights.

It’s National Law Day today and what better way to celebrate it than explaining complex laws in a simple, short-form video.

LawWiser brings to you one of the best-known experts in Arbitration Mr. Tejas Karia, Partner and Head, Arbitration, Shardul Amarchand Mangaldas & Co., who simplifies ‘recognition and enforcement of foreign arbitration awards in India’

Arbitration has been emerging and much needed alternative needed in India. Now we are seeing the new normal during the lockdown and we are adapting the digital means to run our court system. It is the time we adopt Online Dispute Resolution Mechanism more than the past practice in the court.

In our Know Your Law Series.

The conversation will help you to understand about the overall Arbitration in India, Initiating Arbitration Proceedings and how it has been accepted more in the New Normal.

Need for Mediation in 3 minutes with Tara Ollapally

Quick take from Tara Olappally, Co-Founder and Mediator, CAMP Arbitration and Mediation Practice Pvt. Ltd. on the recent signing of the Singapore Convention on Mediation and the need for focus on Mediation as a sustainable solution for alternative dispute resolution.